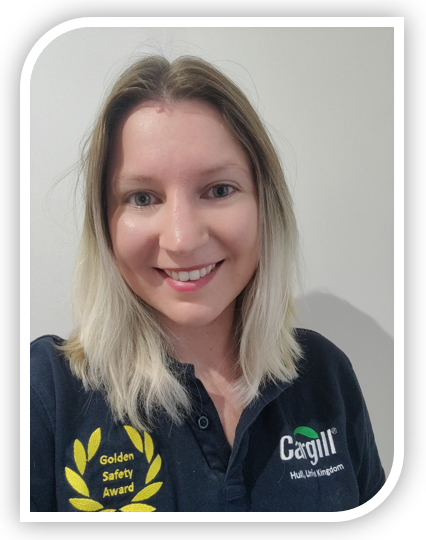 While Alex was finishing university, she was looking for the opportunity to complete a graduate scheme in engineering. The two- to three- year program would use project-based learning to slowly introduce her to the role, the industry, and the workplace dynamics. Coincidentally, Alex was already in the midst of her Industrial Placement internship, when through her Cargill network, she was encouraged to apply for the Technical Management Training. Already familiar with the company, her colleagues and the type of work she could do, she applied and was accepted. At first, she thought she was going to just shadow employees, but quickly discovered this was going to be hands-on. She took on projects, collaborated with colleagues across departments, lived aboard for a short period, and took on the responsibilities of a shift manager. Every day she was making decisions on continuous improvement, digitalization, audits and safety situations. She took the skills she learned in university to help her tackle real-world problems. At every stage of her internship and graduate scheme, she felt like she had the support she needed to succeed.

I had no real expectations. I didn’t really understand what I’d be going into for an Industrial Placement. I expected to be shadowing someone but that wasn’t really what happened. Mostly, I was given actual real jobs, projects and improvement situations. Quite a hands-on, thrown in the deep end kind of role, with lots of support along the way.

How has your internship experience prepared you to take the next step in your career?

What type of projects have you been involved in during your graduate scheme?

In my Technical Management Trainee role, I was fortunate enough to travel abroad for three months. I lived in Frankfurt doing a biodiesel project that was very interesting. This was a rare opportunity to travel and live abroad, but they do occasionally come up in Cargill.